We've finally had a breakthrough with potty-training Grant. He had been sooooo resistant. Over the past several days we finally resorted to just putting him in underwear and leaving it up to him. We've got the candy jar full of M&M's sitting in the bathroom, and we also implemented a sticker reward chart. If he pee-peed in the potty 12 times, he would get a present we had previously picked out at Wal-Mart. Well... today he got his twelfth sticker, one of which he heroically received after halfway falling into the toilet at church.

He is still being resistant about it. He has to hold it until he just can't take it anymore, and then he'll finally go. But he's getting the hang of it. For me, potty training has been one of the most difficult issues of parenting... As the saying goes, "You can't make 'em eat, and you can't make 'em poop."

Below is a picture I took today of him, his buddy Champ, and his present. He's definitely a big boy now. 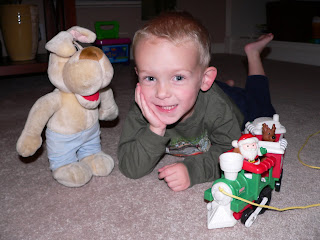 Posted by House of Sawyer at 8:44 PM No comments: 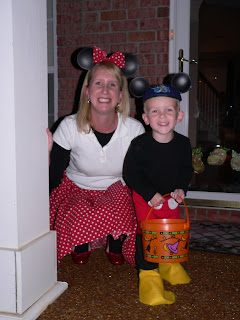 Mimi, Pops, and UD came trick or treating with us. We were the only group with an adult to kid ratio of 4:1.

The morning after was a bit of a struggle... Grant wanted his candy for breakfast. The lack of a nap the day before, topped off with getting to bed late, was a recipe for disaster (or for a two year old, a tantrum). He settled down after I threatened to throw all of his candy in the trash if he didn't stop fussing. He had Fruit Loops for breakfast instead.
Posted by House of Sawyer at 8:24 PM No comments: