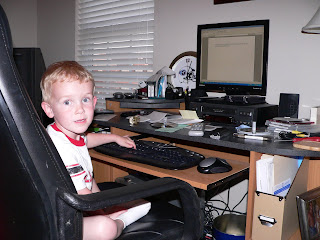 Here's Grant on Daddy's computer. He loves to push letters on the keyboard and have us try to pronounce the words. He can now count to 30 with a little help and can spell his last name.

I was messing around with him yesterday. I wrote a word on a piece of paper and asked him what it said. He said "cat". He was right! My mouth fell open. I wrote another word. He said "dog". Better luck next time. The word was "ant".

Today he was playing with some number flash cards with my mom. He was asking her what the numbers were. When he asked what "66" was. Mom said, "That's sixty-six." The card was laying sideways. Grant said, "No, that's ninety-nine." We both about fell out.
Posted by House of Sawyer at 8:40 PM No comments: