Posted by House of Sawyer at 9:40 PM No comments: 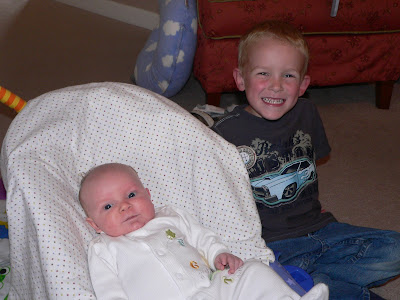 We're starting to get into a little bit of a routine. Drew usually has us starting our day between 6 and 7am. He eats. He poops. He smiles. He fusses. He's up for about an hour. Then he naps for exactly 45 minutes. We repeat this process over and over the rest of the day until bedtime comes at 6:30pm. I then get him up at 10:00pm for a "dream feed." He then gets me up at 2:00am for a "I haven't eaten anything in 4 hours" feed. He goes back to sleep easily and has been waking up again at 5:00am. I feed him, and if the sun is just barely peeking through the window, he decides he doesn't want to miss a lick of daylight and he's up for the day.... until... (I've just figured out recently) I put him in his swing and we both get to catch 2 more hours of sleep!!!

Thankfully Drew's frequent napping allows us to occasionally "forget" that we have a newborn in the house, and I'm able to grab a shower, fix a sandwich or have some one on one time with Grant. These days our one on one time consist of me watching him play transformers, playing tennis outside on the driveway, or if I'm lucky, I can convince him to sit down and do a craft with me.

The other day I couldn't find enough crafts for him to do. We made dinosaurs and dogs out of paper plates. 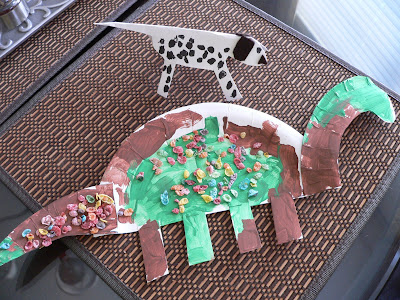 When we were finished, he drew the coolest picture recapping the the things we did that day. He came up with the idea all on his own. He included drawings of him and I as well as drawings of his crafts, a tennis racket, and a reproduction of the painting he did. He also included the words "binosaur", "dog" (written backwards, I think), and "tennis" (written in a vertical orientation.) 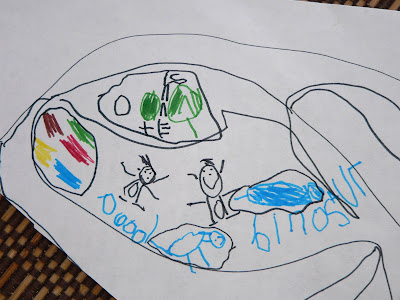 Grant is still doing great with the change of having a baby in the house. He's not much for entertaining Drew yet, but he insist on hugging and kissing him about 4 or 5times a day. 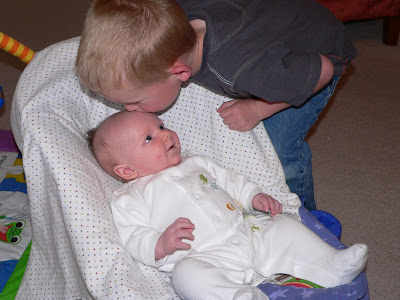 On the weekends, he stays busy with T-Ball. 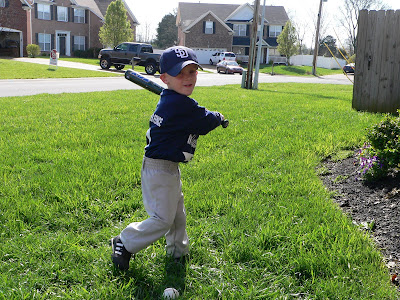 And Drew stays busy beefing up so he can keep up with big brother soon. 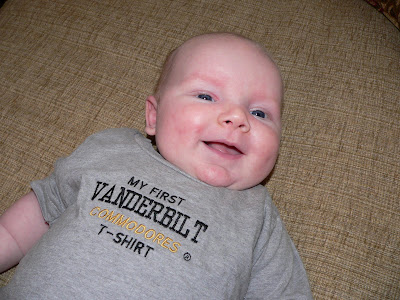 Posted by House of Sawyer at 8:42 PM No comments: 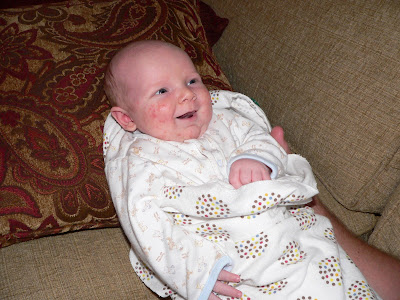 Drew has been smiling here and there for a couple of weeks, but this is the first one caught on camera at 4 weeks.

After clicking and reviewing the picture, a thought occured to me... I think the first picture we got of Grant smiling he was propped up on a pillow similar to that. And then it also occured to me... he was wearing that same outfit! 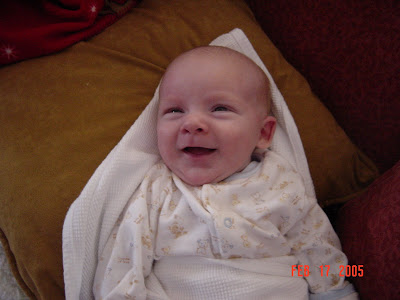 Well, at least they have different blankets-- and Grant didn't have baby acne.

I've got to stop comparing the two of them.

I look forward to seeing their differences shine through as they both continue to grow and develop. Although, Grant has spoiled us on being a good, smart, athletic boy. If they are exactly the same, I will be thrilled as well.

Do you think he's getting enough to eat? 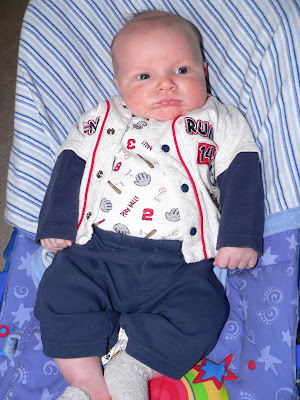 The fact that he has three chins answers that question.
Posted by House of Sawyer at 12:40 PM No comments: