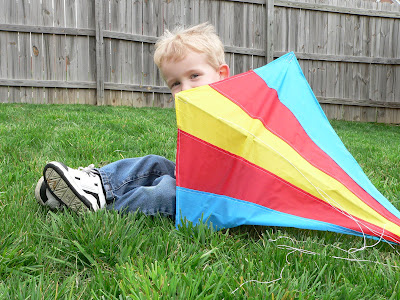 and we're loving it!
Posted by House of Sawyer at 9:49 PM No comments: 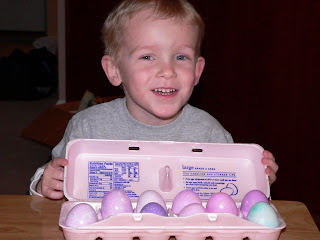 This was the first year Grant was old enough to decorate eggs with me. It was fun to get some craft time in before Danny and I left for Tampa.

Grant stayed with Mimi and Pops Thursday night as Danny and I connected in Dallas to fly to Tampa. We arrived to beautiful sun and 79 degrees. We had a few hours on the beach and then it was off to the NCAA tournament.

Unfortunately, the Dores played their worst game of the season and got blown out by Siena. We were so bummed out (and I was missing Grant) that we decided to come home Sunday instead of Monday. It rained all day on Saturday, but we enjoyed driving up the coast a little bit and watching basketball at the hotel. We topped it off with a fabulous dinner at Island Way Grill.

We flew back through Miami. Firstclass baby!

Grant got to go to two Easter Egg hunts while we were gone, and the Easter Bunny left him a present at Nana's house.

Danny says I made him come early, but I think he missed Grant too.
Posted by House of Sawyer at 8:48 PM No comments:

Easter Bunnies in the Backyard 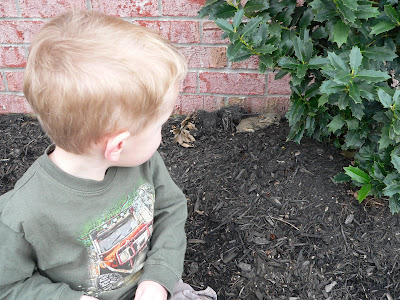 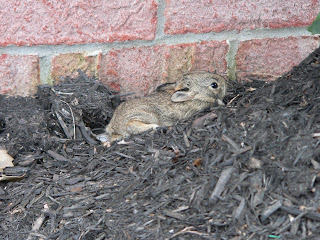 I've suspected for about a year now that there's a furry little creature who keeps our monkey grass nibble down to nubs. Well, I finally found the real life evidence. I was swinging Grant in the back yard when I notice a big patch of fur in the thick grass. I pushed some of the fur back with my foot expecting to see a deep hole. Instead, I found a shallow nest and several sets of eyes looking back at me. Suddenly, three teeny tiny baby rabbits jumped out and hopped for their lives. They jetted over to the side yard and I (not wanting to disturb then anymore than I already had) decided to leave them alone (after a few pictures of course).

The "Mama" in me just prayed they'd find their way back to their mommy.
Posted by House of Sawyer at 8:24 PM No comments:

I can't say enough about Sweetman Swim School. Grant was in a class of newbies this time. He was the senior swimmer, but at three years old, he was one of the youngest. Mr. Gareth had Grant demonstrate to the big kids how to jump in and roll over to his back. I was so proud. I think Grant was too.

By the end of the week he was learning his "Bubbles and Roll". He's going to be a star at the beach this summer. 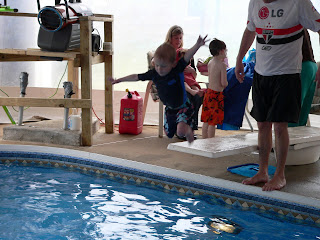 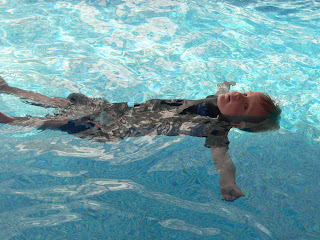 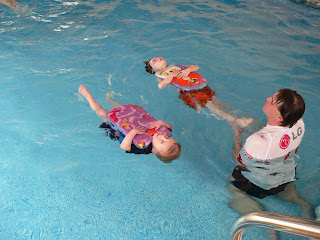 Posted by House of Sawyer at 8:09 PM No comments: 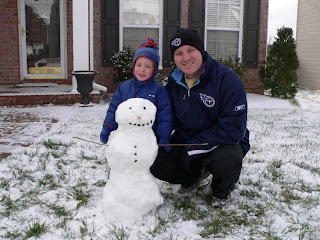 We woke up on March 8th to our biggest snow of the winter. We got a whole 2 inches! It's was just right for making a snowman and sledding in Grant's makeshift sleigh, a carboard box. The snow was gone by mid afternoon. Just the way Danny and I like it.
Posted by House of Sawyer at 7:55 PM No comments: