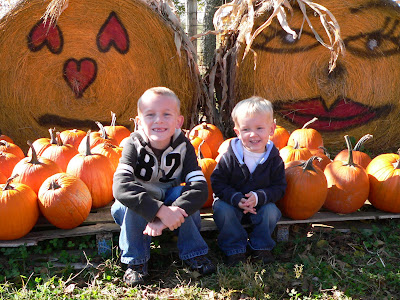 annual trip to the pumpkin patch 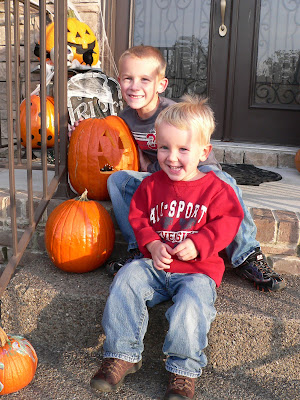 This year Halloween fell on a Monday.  Grant just couldn't understand why he had to go to school on a holiday.  I have never considered it, but it is a very good question.

My goal was to have everything ready by 5:00pm so that we could get some good outside shots of the kids while it was still daylight.  Success!  I had chili on the stove by 4:00pm and the kids in costume by 4:30.  Grant's buddies came over for some shots too.


Well, Drew didn't want to put on his green pig costume to take his picture with the boys.  We thought maybe he was hungry and grumpy.  Or, maybe he was just worried all of those angry birds would get him.
After dinner, he was ready for trick-or-treating and a picture with Grant. 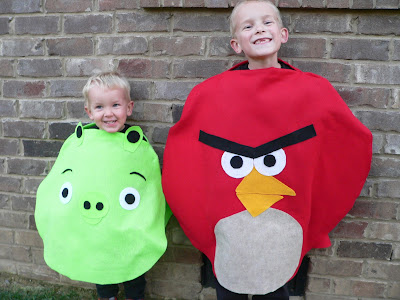 Nobody was sick this year. This hasn't happened since Drew was born.  For Drew's first Halloween he had an ear infection.  And last year, Grant had strep throat.

This was also the first year that they had coordinating costumes.  I had high hopes in dressing Drew up as a cute fluffy lion.  But, after hearing that mommy was going to make Grant an Angry Bird costume, Drew decided that he would be a green Angry Bird pig.  I was thrilled with the way that they turned out.  In hindsight, I am glad that I coordinated them... it may quite possibly be the first and last time that I have that chance.

They got to enjoy going door to door with their cousins, aunts, uncles, mommy and daddy.  Drew made it about a block and said he was all done.  He actually walked most of the way.  He quickly got tired of trekking up several steep driveways and yards for his treats.

I took him home while Grant and the others continued until their buckets were full. 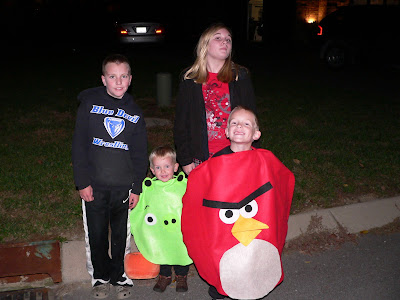 After trick-or-treating, we enjoyed hanging out in the cul-de-sac with family and neighbors around the fire. 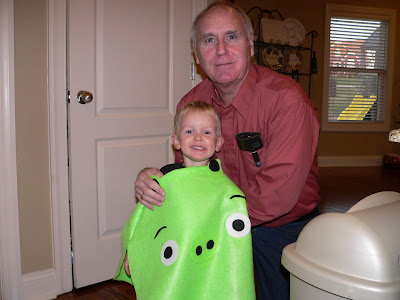 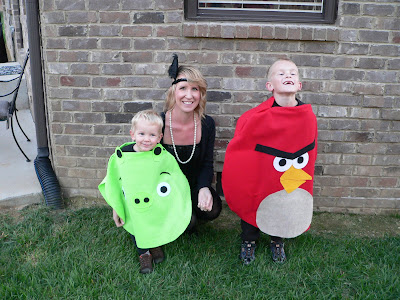 Can't wait to do it again next year.
Posted by House of Sawyer at 9:15 PM No comments:

Ok.  It has been way too long since posting.  I love this blog.  It's not so much about who reads it.  It more so for me.  Time passes so quickly.  I find that when I write about an event or record the kids' latest developments, then I remember it much more vividly.  So here's what we've been up to over the past month... or so.

On fall break, Danny and I took the boys to Chattanooga for a quick getaway. We drove up on Friday and then spent a few hours at the aquarium. We took Grant when he was nearly the same age as Drew. Needles to say it was sweet to do some of the same things we did 4 years ago with our now complete family. 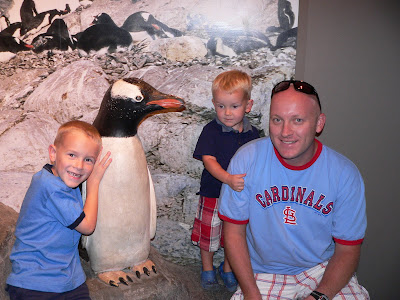 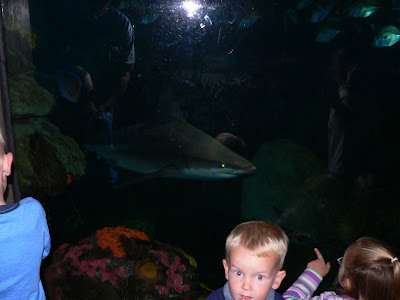 See the fear in Drew's eyes in this picture.  That shark came out of nowhere and headed straight toward us.  Drew was scared and Grant was so terrified he started crying. 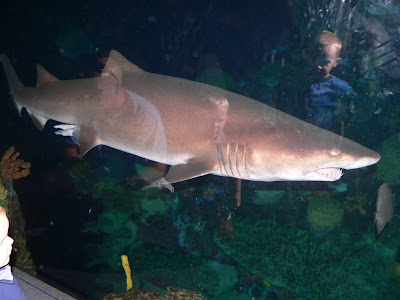 After calming down, they were able to take a closer look. 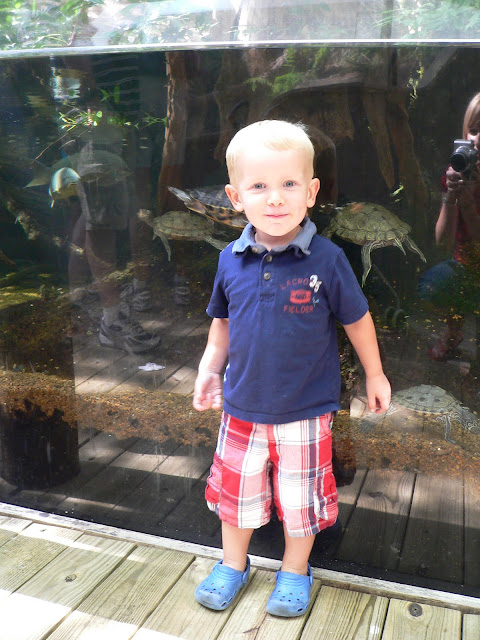 I got this same picture of Grant when he was two.  And, I love it.  Danny wonders how I remember stuff like that.  And it's quite simple... because I either blogged it or scrap booked it.
The next day we went to the Tennessee Valley Railroad Museum for a look at the train yard and then a ride on the train. 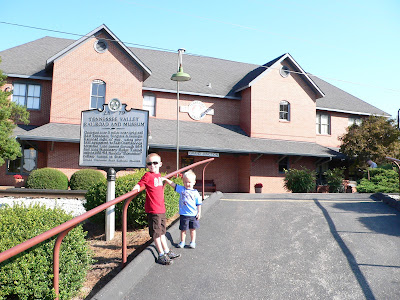 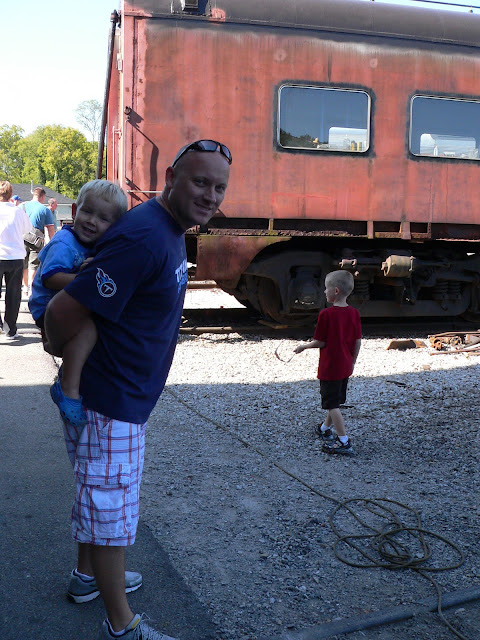 As you can see in this pic, Grant wasn't into the trains so much this time around. He has his moments here lately.  He's either super excited about something or he turns into a whiny two year old if he doesn't get his way.  Hmmm, I wonder where he gets that from?  As it turns out, just as Drew copies everything Grant does, it also works the other way around. 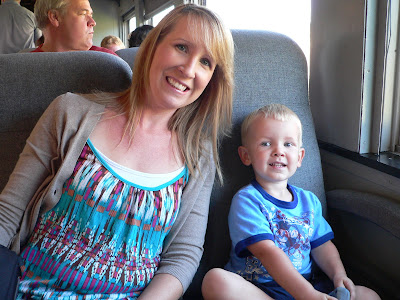 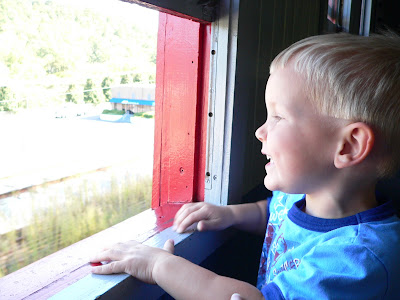 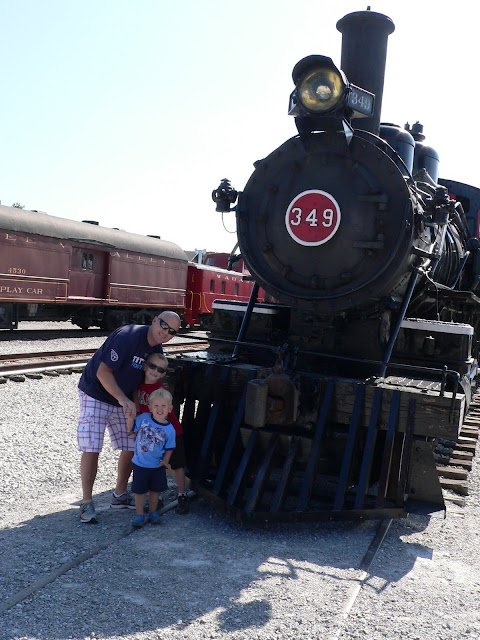 I know.  Too many pictures and not enough words.  Hopefully, I'll have a sappy, meaningful post coming very soon!
Posted by House of Sawyer at 9:10 PM No comments: