Well, it appears Drew is packing on the pounds a little more quickly. He'd already gained his birth weight back plus about a pound at his two week check-up. He topped off at 9 lbs. and 11 oz. 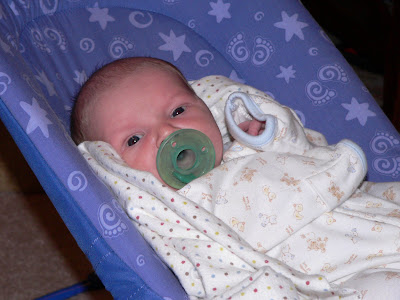 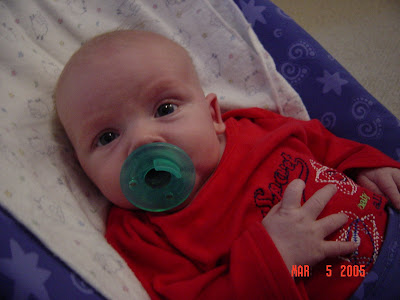 Having done this before, you definitely know what to expect the second time around. But, it doesn't really make it any easier though. --Those 1:30am feedings still come way too soon. --And endless moments of soothing Drew to sleep have to begin all over again as he wakes up as soon as you put him down. But I'll hang in there knowing this phase is only temporary.

What is easier this time, is not having to worry about blue spells, oxygenation levels, seizures, cardiology appoinments, and open heart surgery. Looking back, I don't know how we made it through with Grant. But somehow we did. 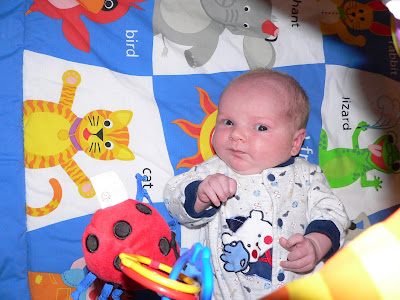 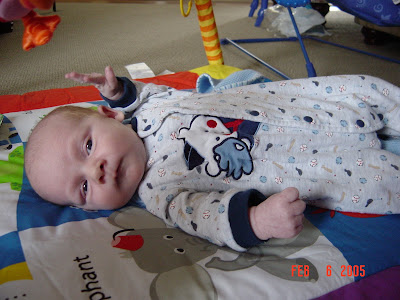 And now he's grown up so fast. He will always be my little hero. 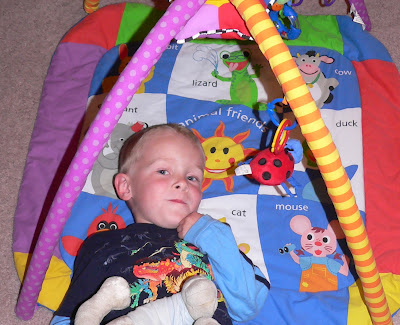 Posted by House of Sawyer at 11:13 AM No comments: 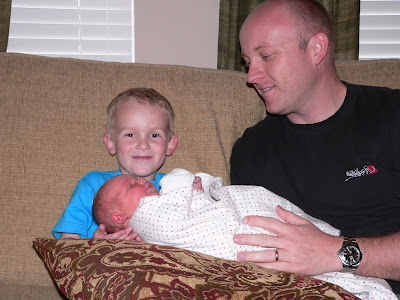 I have been on and on lately about my pregnancy and now baby Drew. I have to take a moment to brag on Grant.

He's been wonderful since the arrival of his new brother. Over the past 2 weeks, the words directly from his mouth have been, "He's finally here." And, "I can't believe we have a baby." And he actually said, "We get to keep him?"

He hasn't been acting out or trying to get attention or-- anything. Quite simply, he's been wonderful. For the first few days, he would put his hands over his ears when Drew started to cry. But now he's gotten used to it. He says, "Mommy, Drew's crying!" (As if I didn't notice.)

Here's a picture of him coming into the hospital room to see his little brother for the first time. 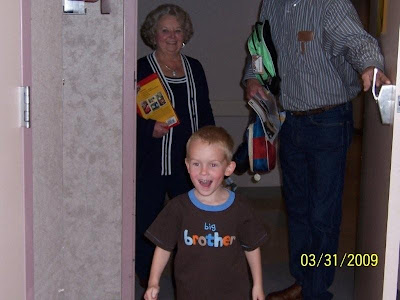 Does it get any sweeter?
Posted by House of Sawyer at 8:30 PM No comments:

Posted by House of Sawyer at 6:54 PM No comments:

He made us wait long enough.

But it was oooooh so worth it. 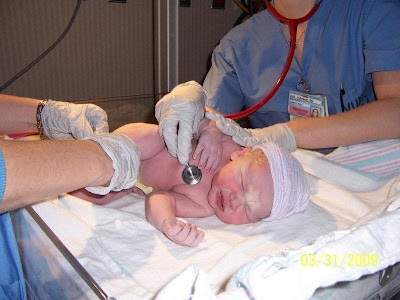 Drew is already trying to "one up" his big brother.... he weighed in almost a pound and a half bigger! Also, unlike his big brother, he's great at breastfeeding. That's where their differences end though. Looking through Grant's baby pictures, we've realized they look just alike!

On Monday (3/30) at 10 days post 40 weeks pregnant, I went for my Ultrasound. Danny had a feeling all morning that we would be having a baby that day, but I was still prepared to wait until Wednesday. The results showed that my amniotic fluid level was very low so the induction could wait no more. We went home to grab some lunch from Arby's and get our bags. We made arrangements for my mom and dad to take care of Grant. I was admitted to Vandy about 2:00pm.

The similarities between this one and Grant's labor were strikingly similar... With Grant, we also went for an ultrasound at 10 days post 40 weeks with him. Fluid level was low so we went home for lunch (Arby's again!). We got our bags and started the induction around 2:00pm.

But that's were the similarities end. Everyone says your second labor and delivery is much faster than your first, but everyone also says your second baby comes sooner that the first as well. I wasn't falling for that again-- I was prepared for a long and grueling night. But it turned out to be rather short and wonderful.

I got started on Pitocin about 4:00pm. My midwife did a great job making sure the contractions didn't get too close together and letting me get out of the bed. Mom and Dad brought Grant by. He was so sweet. He gave me a hug and kiss even though I was hooked up to monitors and IV's. I almost teared up knowing the next time I would see him, he would officially be a big brother.

My contractions were quite tolerable until my water broke at about 8:30pm while we were watching Dancing with the Stars. I was told I could have my epidural at anytime, but I waited until about 10:30pm. I was just 4cm dilated, but I was ready.

After getting my epidural, I was prepared to take a nap, but the pain did not ease up in my left side. The epidural only took on the right side, but after an adjustment it evened out a little bit. God bless those two anesthesiologists!!!!! They did a wonderful job giving me just enough to ease the pain. However, I could still move my legs and feel the contractions and pressure. It was amazing.

At around 12:30pm I was already fully dilated. Danny called my mom to come back to the hospital. I started pushing at around 1:15am. And at 1:46am Drew came into this world and took his first breath. He laid on my chest and let out the sweetest cry as Danny cut the cord.

After the nurses cleaned him up a bit and checked him out, they weighed him. I could not believe how big he was. 8 pounds 15 ounces. No wonder I could barely get off the couch the past couple of days. 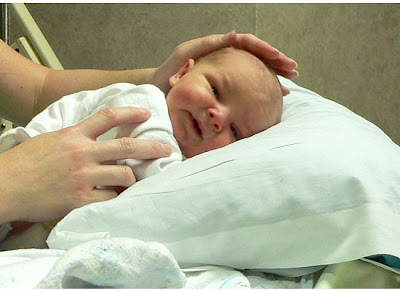 We went home just about 36 hours after he was born. 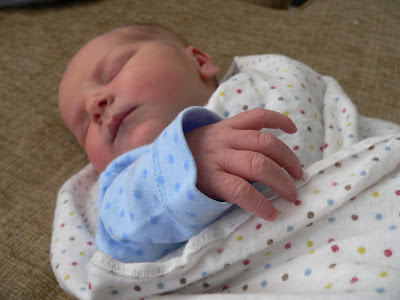 He's absolutely, positively perfect. And we are blessed once again with a beautiful, precious boy.
Posted by House of Sawyer at 2:21 PM No comments: