I anticipated Grant's first day of school for many weeks.  We opened a door on his calendar each day.  I repeatedly talked about his new routine with him.  The night before we got his back pack ready and laid out his clothes.

I put him to bed by 8:00, but after brushing his teeth and reading a book, he complained that his belly hurt.  I was pretty sure it was just nerves getting the best of him.  Minutes later, he was doubled over in bed crying.  I began to fear that this whole kindergarten thing is going to be alot harder than I had anticipated.

I finally got him settled down and said good night.  About 20 minutes later, I heard him coughing.  I ran to check on him.  Kindergarten nerves had definitely not gotten the best of him.  A stomach bug did.

My Facebook status would read... "Grant did excellent for his first day of school.  Mommy did too."

I am so proud of him.  He's actually said several times that he loves it.   He did shed some tears on day seven, but I think it had more to do with missing Daddy than going to school. 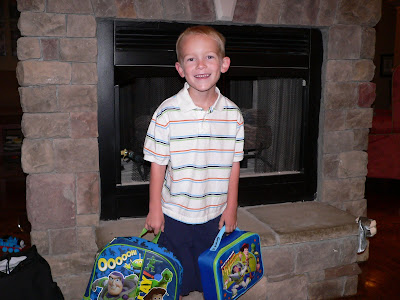 He's officially a Kindergartener.
Posted by House of Sawyer at 9:36 PM No comments: