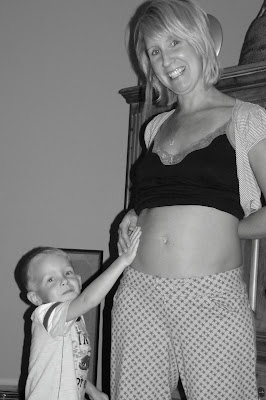 Well, I'm more than 14 weeks pregnant and we're just now getting around to taking a picture of my growing belly. I should add, this picture doesn't do it justice. It is actually MUCH bigger than it appears from this front angle. Also, I thought the black and white would be more flattering especially by the ninth month.

I've gotten my energy back, but now my major complaint is I'm hungry all of the time. I wish I could just go three hours without needing a snack. Oh well, the baby needs banana pudding and chocolate milk right?

The past couple of weeks the following have made its way into my grocery shopping cart for the first time ever: pimento cheese sandwich spread, Little Debbie snack cakes, and the ingredients for banana pudding.

But my major cravings have been for --no, not chocolate, not ice cream -- but sandwiches. Any kind of cold cut will do, but primarily turkey and roast beef. Not a great craving to have since pregnant women are advised to stay away from deli meats!

So enough about food.

We've been hinting to Grant that there is a baby inside of mommy's belly. And thankfully, no questions yet. He started his new Montessori school in August and now after just over a month, his teacher informed me they had a major break through. He is talking! And not just words here and there, but telling stories and talking about his family. This may sound ridiculous to others, but Grant, who is normally an outgoing talkative kid at home, shuts down around strangers, new kids or new situations.

He now cries when I pick him up from school because he wants to stay.

I'm so proud of him.
Posted by House of Sawyer at 9:00 PM No comments:

"Mommy, I want to go to Target and get that track."

"Well, you'll have to wait and get something like that for Christmas from Santa."

"But I don't want to get it from Santa. I just want it from Target."

"I want a lot of stuff at Target too, but we have enough toys and stuff."
Posted by House of Sawyer at 7:43 PM No comments: 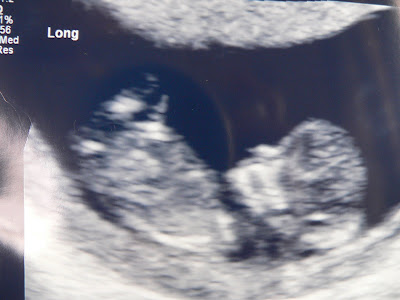 Okay, so maybe I'm jumping the gun a little early with the baby announcement. But I thought it would be cool to post the baby's first picture.
We were amazed at all of the detail you can already see at 12 weeks. The head is disproportionally large at this point, but you can already see the nose, mouth, and legs. At our first ultra-sound with Grant, he just looked like a peanut.


Grant went with us to the appointment. However, we didn't tell him what is was about. We're waiting until it is more obvious to tell him that there is a baby inside of mommy. I can just hear the questions now... "Why is there a baby in your belly?" "How did it get there?" "How does the baby get out?" "When does the baby go back to the hospital?" I need more time to come up with the appropriate answers.

Seeing the baby kick and squirm made it a reality to Danny and I... there is an actual baby... growing...and living.... inside of me!

Ultra screen tests and checks were all okay for which we are very grateful. We'll be having a fetal echocardiogram at 28 weeks to look for any heart defects. We have a 1% increase chance in having another child with Tetralogy of Fallot. It seems so small, but deep down it is very scary. I am praying everyday for a healthy baby, and I have faith that God will answer our prayers.
Posted by House of Sawyer at 7:45 PM