It all started on December 23rd when I decided not to go to the Titans game. Danny calls me a fair weather fan. However, I had an inclination to stay at home with Grant. Only hours later would I realize that decision would win me the "Mommy of the Year Award".

Grant had woken up that morning with a red and gooey eye. I assumed it was because of his cold and decided to watch it. Well, after his nap, it was swollen and oozing. Here we were... -Sunday -3:30pm -one day until Christmas -pink eye! I went into full out Mommy Mode. Our Christmas would not be ruined with a sick child.

I knew a trip to Vanderbilt on a Sunday afternoon was out of the question so I searched online for CVS Minute Clinic... "Minute Clinic, The Pioneer and Leader of Retail Health Care." Works for me! And open Sundays 10-4.

I threw on Grant's shoes and jacket as fast as I could, and we raced out the door. I think we made it there in 5 minutes flat. It was 3:55. We were the last ones to sign in.

The Nurse Practitioner took one look at him and said it was pink eye. One $50 prescription later, and our healthy Christmas would be saved.

We spent Christmas Eve at my Mom and Dad's. Who needs presents when you get ribs, beef brisket, and hot fudge cake. 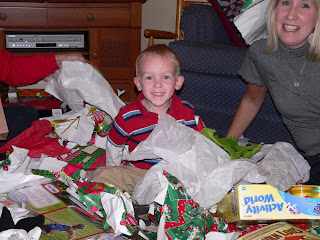 Grant has never been fond of Santa Claus. He likes the idea of him, but he stays a good 15-20 feet of him at the malls. So the thought never crossed our mind that Grant might be frightened of the fact that Santa was coming to his house... in the middle of the night... while he slept... alone in his bed. On Christmas Eve we made the mistake of reminding Grant that Santa was coming tonight. I know we must have said it more than 40 times. Grant ended up requesting to sleep in our bed or mommy and daddy sleep in his bed (which he had never done). We think he thought Santa was actually going to show up in his room in the middle of the night to say hello. We finally just stopped talking about it. We put him to bed and simply told him we would open presents in the morning. He was fine.

This year was the year of Hotwheels, marble race, putt-putt and pillows. He now has more hotwheels than trains. Danny has enjoyed Grant's 4 lane race track almost as much as Grant. They've already determined the fastest cars by holding various heat races. 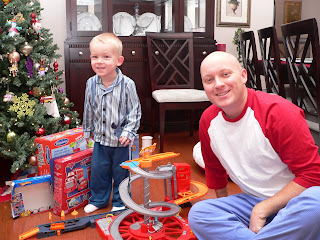 And just as we thought we had survived the Holiday's unscathed...Grant woke up on the 29th with an accident in his diaper and not wanting to eat breakfast. I knew something was wrong when he turned down a cinamon roll. As I went to get him out of his chair, he got sick. But there would be no quick cure for a stomach bug. Just lots of towells, lots of hand washing, and praying that we don't get it. 24 hours later Grant was much better, just a little puny. And Danny and I have survived unaffected. 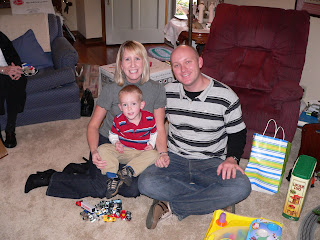 December 30th. Danny's Birthday--- Danny, realizing that his birthday is crammed in between Christmas and Grant's birthday, decided his doesn't matter anymore, besides the fact that he no longer wants to recognize it since he hit the big 3-0 last year. He didn't want a big family to do so he agreed to a home cooked lunch at his mom and dad's and funfetti cupcakes. Ultimately, Danny's Grandmothers found out that there was a get-together that they weren't invited to, and they were not happy. Well, that's a little bit of an exaggeration, but you just have to know those two. If you ask me, Danny had the best birthday ever....home style cooking for lunch, jambalaya as requested for dinner, and the Titans pulled one off over the Colts. 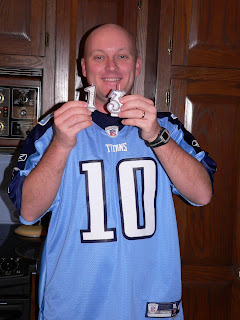