Buzz, Strep, and a Big Gulp

Halloween continues to be one of my favorite holidays.  It's just fun and relaxed.   There's no special menu to plan.  I don't have to stress about the house being perfectly clean.  We just throw a pot of chili on and have our families over to see the kids get dressed up.

This year was a little more hectic than usual.  First, I realized on Halloween day that we forgot to carve the pumpkin.  Second, I had promised Grant that we would make his selection of Halloween cupcakes.  What did he choose?  ...the haunted cupcake tower.  Lastly, well, Grant wasn't feeling so great for about half of the day.  AND we still needed to do laundry and pick up the house, at least a little bit .

After some Motrin and a snack, Grant and I got the pumpkin carved, although I'm still kicking myself for not getting a picture of it. And we ended up having a great time making the cupcake tower. Danny cooked the chili and helped me pick up the house. 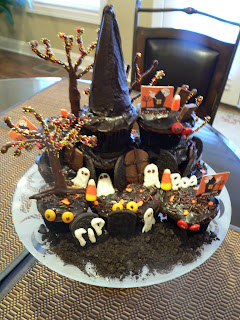 After the chili was consumed, we got the kids ready and headed ﻿out for some treats.  Oh wait!  I DID get a picture of the pumpkin.  (Sorry Peyton, I cut off your head, but I couldn't see you in your scary costume!)
Buzz Lightyear, dalmation puppy and the Grim Reaper﻿ 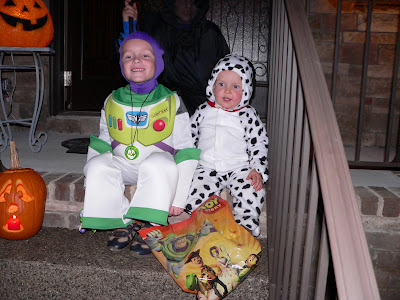 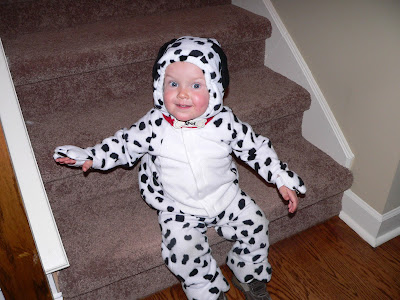 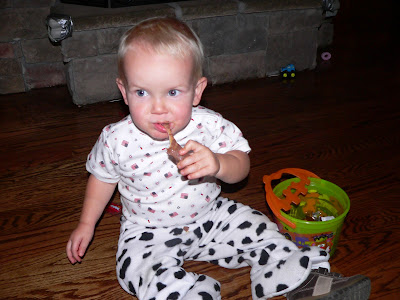 Drew learned a new word, "chotlet."  And this would be the last picture of Grant with all of his baby teeth. 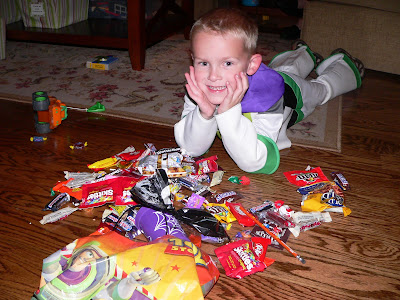 ﻿
﻿The next morning he woke up crying and still not feeling well so he got to play hooky from school.  I spent half the day in denial that he was fighting anything more than a little virus.  Then broke down and took him to the clinic after lunch.  Poor guy.  He had strep throat.
Disclaimer to all of our neighbors:  Please accept my sincere apologies to those whose candy bowls Grant stuck his hand in on Halloween.  I had no idea!
That night, still feeling awful, we left Grant to munch on his dinner in front of the TV.  After a few minutes we heard a-- "um, I think I lost my tooth."  I rushed in there to try and help him find it, and then he clarified-- "I think I just gulped it."
Grant lost his very first tooth, literally.  Luckily (I guess), he was too busy feeling awful to worry or think about it.  I told him I would leave the tooth fairy a note.  He went to bed and then I slipped the note in his room along with five dollars in QUARTERS.
This misfortunate tooth fairy didn't have a dollar in her entire haunted "castle."
Posted by House of Sawyer at 9:15 PM 2 comments: